You hear your parents and relatives talk about the bands they saw when they were young. Queen, U2, INXS, Prince, David Bowie. All unique artists who at the time revolutionised music and what they stood for, all the while connecting with fans on a visceral level.

A band has come along, an Australian band none the less that have created this sense within the community. Lepers and Crooks. A group that have entered the music scene providing audiences with something they haven’t seen in decades. A new unique raw sound that speaks to audiences. Having been signed to Petrol Records, the band have been touring Australia wrapping up at Sydney’s Oxford Art Factory and were thrilled with the response they’ve received nationwide. I was standing next to fans who followed the group around the country.

The support acts were fitting and went well with the show. Each had elements that resembled or related to Lepers and Crooks. The first act, Raindrop, with their Psychedelic tunes had fans entranced with their vibe. A very 70’s feel that had me thinking their set would suit a variety of events at the moment, fitting with how society have redeveloped the 70’s era in both fashion and film. They were the highlight of the opening acts for me. The second opening act KHNZ had the crowd singing, dancing, cheering, completely alive and in the momentum. Music that resembled a cross between Twenty One Pilots and Maroon 5. I just couldn’t get over the incredible response from the audience, fans were feeding off the energy of lead singer and vice versa. The third opening act The Mountains provided a mellow country feel to the night. The intro however had elements of old school rock beats that then fused with a cool country edge to the sound.

Lepers and Crooks opened with Mirrors Edge, wearing a poncho, glasses, hoodie scarf and a stripe jumper, lead singer Sam Baker definitely created a look that was reminiscent of the rock heroes of London. Embracing the song Baker sang with his arms outreached upwards towards the audience in almost a call to the crowd, anthemic. Drawing them in and challenging them to join in and feel just as empowered as he was. What I loved to see was the way he would acknowledge people in the crowd, smiling in an endearing way towards fans who caught his attention. Throughout the night I couldn’t help but see elements of Ozzy Osbourne and Mick Jagger in the way he takes the stage, the way he performs, the emotion whilst he sings.

The music throughout the night was just as enthralling, the beats in Let You Go were cool, followed by a smooth soul rhythm mixing perfectly with the sound. There was a great connection with the fans, another part that just oozed with confidence and charisma was where Baker would take the hands of fans in the audience and charmingly kiss their hands during Her Kiss. There was a great moment starting off Fear No Blood where the whole band were completely instrumental, no vocals, a raw capturing sound that was so drawing. Baker played the harmonica, to compliment that sound. Definitely another favourite moment. A combo of Freedom and a cover of Nirvana’s Territorial Pissings had fans going wild. Fans were singing along, reaching forwards to get closer to the band. One fan in particular ran on stage and leaped off to crowd surf, moment that lasted only a few seconds but had onlookers fascinated with the way this group impact their fans. All of a sudden there was a walking crutch on stage, a prop that made its way from Baker to bassist Nick Burg. It was here that guitarist Patrick Reuter-Town sang with Baker and it really elevated the performance. Which just went to show there are different levels within this group, different edges that create overall an dynamic performance.

Something that throughout the night you could feel, an energy perhaps, was addressed by Baker, mentioning the way friends and family come together, thanking everyone. There’s a real respect between the performers and audience, one that you can see and feel. For me, that’s a really great quality and really makes you want to see these boys succeed. Which I have every confidence they will. The song Heather had a bluesy to rock feel that was quite unique. You haven’t seen anything like this in decades, complimented with amber lighting, that really made you take notice.

It was during Sex Emotion that things got even more interesting, a fan made his way onto the stage. When security went to remove him, Baker gave the ok for the fan to stay and proceeded to dance and sing with him. Lepers and Crooks followed with tracks such as In The Night and guitar led This System. During this track Baker sat down and started meditating while drummer Damien Jones played a solo. He then thanked the crowd for coming and following their tour, thanking fans for their commitment. Another fan was dancing on the edge of the stage, another was filming the wicked rhythms produced by band guitarist Alex Court who absolutely tore it up with his guitar solo in this track. Epic is a word to describe it. Ending the show with one final song, Baker spoke about the future and the way that he hoped to see fans especially concerning the new album.

After wrapping up their mammoth 60 date tour across the country last weekend, we can’t wait for the boys release more music and take it on the road. Make sure you grab their killer debut E.P. ‘Her Kiss’ and keep an eye out for any future live shows, you definitely wont be disappointed! 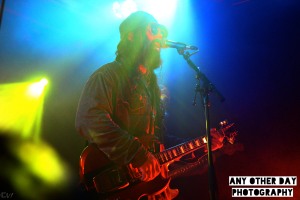 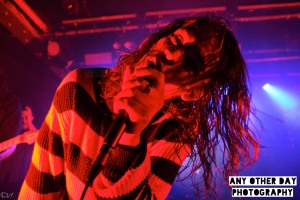