Taylor Swift has done it again. Released an album that could very well be the voice of a generation. Over the past month Swift has been posting lyrics to her songs on her social media. Offering small tastes to the lyrical genius we can expect to hear on the album. She did not disappoint.

Picking up the physical 1989 CD, which comes with 13 polaroids, you couldn’t help but feel nostalgic. The packaging has a 80’s/90’s feel to it, and draws back to a time where Polaroids were the thing. The text also makes a statement and returns to this notion, tugging on the heartstrings of what it meant to be a child from that decade. Further reiterated in her handwritten notes, adding a personal edge for her fans. Swift has gone above and beyond to make her fans feel included in the journey, even going as far to host listening parties at her house. All these strategies have been great tools to generate interest and keep fans informed. It has definitely paid off with the new single, Out of the Woods sold out on iTunes and when 8 seconds of static was released due to an error in Canada, where the track went straight to number one.

You press play. With the first song, Welcome to New York, you see a change, opening with an electronic beat and melody riff played on synth. This is definitely a new chapter for Swift, and her tracks reflect her physical journey in life, and the way in which her sound has matured and changed with her. Moving to NY, moving away from her country element, but, in a way that fans can still appreciate.

Listening to the tracks you can’t help but feel certain songstresses have had an influence on Swift. Such as track 2, Blank Space, you hear elements, reminiscent of Lorde. Her second single Out of the Woods, has an Ellie Goulding feel, however Swift has taken the sound and made it her own. Track 9, Wildest Dreams, has an 80’s feel mixed with Lana Del Rey, dreamy like quality and breathy voice. Completely capturing, it draws you in completely.

Track 11, This Love, has an acoustic guitar intro that is quite romantic, but also has that powerhouse 90’s quality. I think back to Celine Dion and Shania Twain but with a modern Taylor Swift edge. It also harks back to things she’s written in the past. I also found Track 13, Clean, to remind me of Aussie artist Missy Higgins. There are more elements of what Taylor Swift has come to be known for in this song; more of a focus on her voice and what she’s saying. I also loved the addition of what I heard to be a vibraphone. It shows that Swift is exploring and taking in new ideas and developing new creative processes.

All her songs have great lyrics and truly capture you as an audience. Track 12, I Know Places, surprised me. There were twists within the song, moments I felt like it would go one way, but then would travel into complete pop. It was fascinating, listening to Shake It Off in sequence with the other tracks. It bears new meaning and I’m looking at it in a different way. More soulful and it completely fits with the flow of the album. Swift has picked good lyrics to share on social media. You notice them in the songs, and in the context of the sentence or verse, you get a new appreciation for what it truly means.

Track 8, Bad Blood, is rumoured to be about Katy Perry. Interestingly enough listening to the track there is a Katy Perry quality to the music (E.T.). You could call this track an anthem, due to the way it is structured and the way it sounds; with a strong almost chant like chorus. When there’s a connection behind the song, you gain a whole new level. Obviously there’s emotion behind each song, but you respond in another way when it can be relatable. Track 10, How You Get the Girl. along with Bonus tracks 15, You Are in Love and 16, New Romantics, also have a similar quality to old Swift material. The driving two-beat in, You are in Love, is also sweet and melodic. With elements of country with the strings and the keyboard adding edge. In New Romantics her voice is clear and unique, with an 80’s vibe to the way in which she has created it.

I absolutely love Bonus Track 14, Wonderland. Maybe it’s the way it sounds, or the way she constructs the track but it’s probably one of my favourites. I love that you can dance along to this album. Every track, whether it be a fun, carefree dance or a slow dance, Swift has covered all bases. I see these songs in films, driving in the car, on the beach, as a wedding song, sitting in your room; just taking in the words and emotion Swift is expressing.

The pop electronic feel is there, a modern throwback, within the context of 1989 we can gauge the feel of the old becoming the new. This is felt with each polaroid you receive with the physical CD each image reflects the lyrics, such as #57 with the Bad Blood lyric, “You say “sorry” just for show, if you live like that, you live with ghosts,” the black and white image used here reflects the sentiment. Another clear example is #53 the Welcome to New York lyric, “Everybody here wanted something more searching for a sound we hadn’t heard before.” As Swift is pictured travelling on a ferry through New York.

Through her career, Swift has worked with many songwriters and producers, choosing Max Martin as the albums producer this time around. Eight of the fifteen tracks were co-written by Swift with Martin and Shellback, with the track, Style adding Ali Payami to complete the dynamic trio. Swift also collaborated with One Republic’s Ryan Tedder on two tracks, as well as Imogen Heap on Clear. Heap also contributed backing vocals and played drums, percussion, the vibraphone and the mbira on the track. This Love was written solely by Swift, while Out of the Woods, I Wish You Would and You Are In Love were co-written with Jack Antonoff and All You Had to Do Was Stay saw the only sole track collaboration between Swift and Martin.

Another great element to the complete T.S. 1989 experience are the voice memos, which add another quality of the personal. As you listen to it, (different to what you hear on the radio) you learn about her process, and you feel like she’s talking in the space you inhabit. You are listening to what she initially sent to her producers and collaborators (acoustic tracks on the piano and guitar) in a raw, individual way; listening to the early stages of her procedure. Offering insight for fans, even referring to the, “dark lyric bridge trying to …ruin love.” Concepts that Swift discusses in a great portion of her material over the years. Swift also explains in the other two voice notes recordings help when she and her collaborators come up with ‘production ideas’ and ‘beginning stages’ of a song (as seen in Blank Space) and the way in which these parts are incorporated into the final product.

Listening to the music it’s quite striking in its collective maturity, both in sound and lyric. The party- fun-loving feel, coupled with the tracks that are peppy; but in a way pounding and engraved onto the soul of the listeners. There is a reason Taylor Swift is so successful, she is relatable to her audience, she grows, changes, challenges herself, and the way in which she uses music as a tool to express herself, really resonates with listeners today. 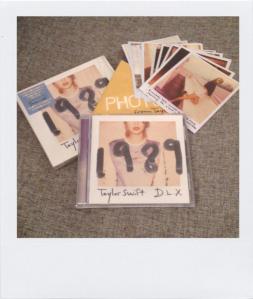 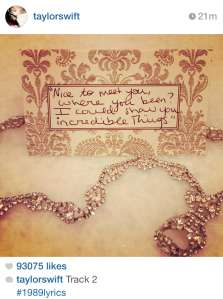 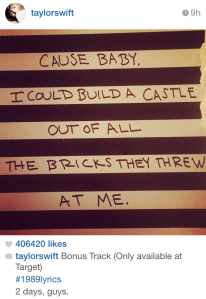 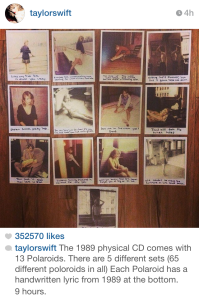 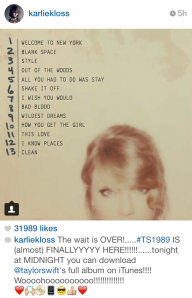